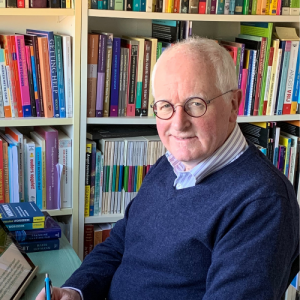 For those who have never gone through a period of depression, it’s hard to imagine what the experience feels like: persistently feeling gloomy, sad and empty inside, together with a bleak perspective on yourself, others, and the world around you. A person who is depressed can no longer enjoy the things  they used to.

Other symptoms of depression include in poor sleep, poor concentration, diminished (or increased) appetite, feeling worthless, or guilty  about oneself, and repeatedly thoughts about death, and/or about committing suicide. The depressed person tends to avoid and withdraw from contact with  people in their environment, resulting in social isolation and loneliness.

To get a sense of what the experience of depression can look like, here’s an animation from the World Health Organization. : I had a black dog and his name was depression l

The animation shows how the ‘black dog of depression’ can completely take over a person’s life, that recovery from depression is possible, and that reclaiming one’s mental health and life involves, among other things, learning to accept the black dog’s presence.

Depression is not always easy to recognize in a teenager. After all, thoughts and feelings are internal events. So, a teenagers negative, gloomy thoughts, and feelings of sadness and emptiness, are not necessarily visible for others. In fact, it may be the case that a teenager seems cheerful among friends, while at the same time being low and depressed when alone.

If the symptoms described above are severe and if they persist for at least two weeks, then that is reason enough for consulting a person’s GP, who can then advise about seeking assessment and treatment.

Break the vicious circle of your depression
Free download

However, genetic vulnerability is rarely the whole story. Psychological factors, such as personality (for example, being prone to anxiety and worry), and negative life experiences (early experiences of loss, or rejection/persistent bullying by peers) can also play their part in making a person vulnerable to developing depression, both in adolescence and adulthood.

Another risk factor is a parent with depressive symptoms. If one of the parents is themselves anxious or depressed, then the likelihood that their children will also develop depression increases with age. This increased risk may be due to either heredity, or the experience of growing up in a family in which one of the parents suffers from depression, or a combination of both of these factors.

Mental health services in general are under pressure, and so this situation also inevitably affects the scope for treating teenagers with depression. It is often difficult for teenagers, and their parents, to gain access to adequate treatment. And, even if they do, they are often faced with long waiting lists.

In recent years, a lot of research has been undertaken, with the aim of collecting evidence regarding the effectiveness of methods for treating mental health problems.

So, if a particular treatment method has been proven to be effective, it is called ‘evidence based’. Currently, Cognitive Behavioural Therapy (CBT) is regarded as being the first ‘treatment of choice’, because it been shown to have a good evidence-base. Another up and coming treatment is Acceptance and Commitment Therapy (ACT). ACT is an offspring of CBT. Unfortunately, to date, no single method of treatment has been found to be effective in all patients, whatever their age.

However, actively involving the parents in their teenager’s treatment has been shown to increase its effectiveness, regardless of the specific method being used. Doing so can help teenagers and their parents break the vicious circles that often develop in their interactions with each other, over the course of time. And, this in turn, often leads to an improved mutual relationship, and increased understanding and support from the parents for their teen. Making it easier for the depressed teen to learn how to handle, and ultimately tame, their ‘black dog’!

It’s quite possible that you still have some queries that you would like to discuss.
That’s why PsychOnline4u offers you a free 15 minute online consultation
Request free call